RB have just launched their latest app! Get revising your GCSE Geography A using the most comprehensive app on the the App Store and Google Play!

We have worked meticulously with our author, Scott Williams, a Head of Geography at a secondary school in the Midlands to bring you 1000s of multiple choice questions to test your knowledge on all that you need to know for your exams. Including images, interactive competitive learning through social media and access to the OCR, Edexcel and AQA past papers. 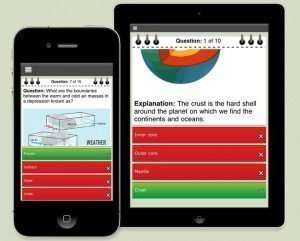 Topics cover both Physical and Human geography – download your first topics for free and then add the ones that apply to you for 69p!

Tectonic plates and the make-up of the Earth; fold mountains and human adaption; effects and responses to earthquakes, volcanoes, volcanic eruptions and tsunamis

The life of a river and its processes; river profiles; river features; waterfalls; valleys and flood plains; causes of flooding and its management; supply and demand of water, water stress and drought

The motion of the sea and its effects on coastlines ; coastal erosion; deposition and transportation; the causes and effects of rising sea levels; weathering; cliff tops and coastal management; soft and hard engineering techniques; salt marshes, sand dunes, beaches and their environment; case study examples

The make-up of ecosystems; biomes; the characteristics of tropical rainforests; decomposition; the food chain and energy flow; habitats and survival; human impact on ecosystems; deserts and habitat adaptation; species and their behaviour; deforestation; desertification and population

Scales of geological time; rock types; the formation of the Earth; rock processes; rock identification; weathering; effects of rock type on the surrounding landscape and human adaptation; quarrying in the UK and different uses of rocks

Check it out and let us know what you think!