This Physics GCSE revision app allows you to self assess your knowledge of the Additional and Core topics for each of the AQA, Edexcel and OCR 21st Century Science exam boards, including a distinction between the higher and foundation tiers within each topic. 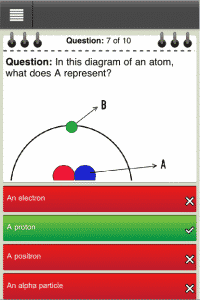 – Choose your level and course from the AQA, Edexcel or OCR 21st Century Science exam boards

Below is a detailed breakdown of the carefully compiled content that students can pick and choose from for GCSE Physics:

Evaluating different methods of generating electricity; supply and demand of electricity; differences between underground and overhead cables; power stations and energy sources; using wind and water to drive turbines; electricity production from the sun’s radiation; geothermal energy; hydroelectricity and solar cells; effects of energy use on the environment; understanding the National Grid

Waves and the Universe

Visible light and the Solar System

Geocentric and heliocentric models and the structure of the solar system; the milky way; observations of the universe with visible light; converging lenses, real and virtual images; understanding telescopes; reflection and refraction of waves between materials; understanding longitudinal and transverse waves and their relationship with sound, electromagnetic and seismic waves

Waves and the Universe

The solar system and the Milky Way, understanding galaxies and the Universe; relative sizes of planets and the Sun; SETI and methods of gathering evidence of life beyond Earth; telescopes and their locations; life cycles of stars of different sizes

Waves and the Earth

Generation and transmission of electricity

Understanding current and voltage and how they are measured; electricity production using non-renewable and renewable sources; factors effecting the generation of electric current; understanding direct and alternating current; transformers and the National Grid; compare and contrast advantages and disadvantages of energy-saving devices; cost efficiency and pay-back time

Energy and the future

The Earth in the Universe

The Earth and the Universe, understanding the differences between planets, moons, the Sun etc.; stars, galaxies and space; observing the night sky; redshift; the big bang theory and the Universe; how the Earth is changing; measuring the life of Earth; Wegener and continental drift; the sea floor; tectonic plates – earthquakes, volcanoes and mountains; P and S waves; the make-up of the Earth; understanding waves

Forces and their effects

Cells and batteries; understanding a.c. and d.c. current; mains electricity in the U.K.; the structure of an electric cable; wiring a plug; fuses and circuit breakers; current, charge and power

Uranium-235 and plutonium-239; chain reactions; the formation of stars; lifecycles of stars depending on their size; supernovas

Understanding the structure of an atom; charging insulators; effects of gaining and losing electrons; like and unlike charges; understanding earthing; using electrostatic charges; current and current in metals; direct and alternating current

The structure of an atom; alpha and beta particles and gamma rays; losing and gaining electrons; fission of U-235; controlled nuclear chain reactions; understand the difference between nuclear fission and fusion; nuclear fusions and stars; considering scientific theories and validation amongst peers

Electric current as a flow of charge; understanding how charge moves; determining the size of current in an electric circuit and how it transfers energy; voltage; current and resistance; understanding series and in parallel circuits – voltage and current; mains electricity; generators, transformers; differentiating between alternating and direct current; electric motors, how they work and their uses

Why materials are radioactive; the structure of an atom; nuclear fusion; understanding alpha, beta and gamma radiation; the workings of a half-life; safe use and handling of radioactive materials including waste; background radiation; using radiation; nuclear fission and nuclear power stations