This app is split into 2 topics (Christianity and Islam), each covering 3 sections: Beliefs, Ethics and Philosophy. It is designed to cover the requirements of AQA, Edexcel and OCR Exam boards. 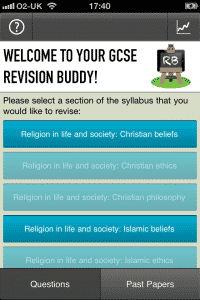 Including: Central beliefs of Christianity; sources of authority; inspiration and interpretation of the Bible; the effect of these interpretations on believers and their lifestyles. The meaning and belief in the oneness of God and the Trinity; the incarnation and Jesus as the Son of God; the meaning of the crucifixion, resurrection and ascension of Jesus; the person and work of the Holy Spirit. Sin and the means of salvation; judgement and the world to come. Religious leaders (bishops, priests, ministers); ceremonies of commitment; places of worship; the role of pilgrimage in the Christian tradition; private and public worship; Holy Communion; The Ten Commandments, religious festivals such as Christmas and Easter; features of different denominations and churches.

The Right to Life, abortion and UK laws and Christian attitudes towards them. Different types of euthanasia and suicide and UK laws and Christian attitude towards them. The use of medical technology; fertility treatments, cloning, genetic modification. Different sexual relationships, contraception and sexuality. Illegal, medical and socially accepted drugs. Marriage, religious and civil marriage ceremonies. Cohabitation and civil partnerships; adultery, divorce and remarriage. The world as God’s creation, stewardship, justice and respect for life and the world. Social responsibility, attitudes to gambling, the importance of commitment, family and the elderly. Christian responses to prejudice and discrimination, immigration and the fight for equal rights. The UK as a multi-faith society. Human responsibility for the environment, Christian opinion and conservation projects. Christian attitudes towards world poverty and organisations for its prevention. Fair trade and the campaigns for justice. Attitudes and theories on war and peace, The Just War Theory, pacifism, terrorism, nuclear warfare. The aims and different types of punishment in society and Christian attitude towards it.

The Existence of God, the difficulties of proving the existence of God. The First Cause (Cosmological) argument,  the Design (Teleological) argument, the argument from religious experience for the existence of God and arguments against the existence of God. God as One in different persons; the type of language used about God; God as all-powerful, all-loving, all-knowing, all-compassionate. Different ways in which believers claim that God can be known. The Problem of Evil and the questioning of an all-knowing, all-loving, powerful God and the existence of evil and suffering. The different forms of evil (natural and moral),  justification for the continued existence of evil and suffering. The Compatibility of Science and Religion,  the origins of the Universe and the world;  the Big Bang and other scientific theories and the role of God in creation. Evolution, different understandings of life after death; out of body and near death experiences. The question of unanswered prayer

The key beliefs and sources of authority that underpin the Muslim way of life and influence Muslim behaviour and attitudes. Understanding Islamic terminology, Prophethood, the Day of Judgment, paradise and hell. The importance of the revelation of the Qur’an to Muhammad, the importance of the Qur’an and its compilation;  Hadith, Sunnah, Surah, the Hijrah;  the significance of Madinah (Medina) and Makkah (Mecca). Different views on Shari’ah; Sunni and Shi’ah (Shi’i). The Five Pillars, their meanings and importance: shahadah, salah, zakah,  sawm, hajj. Worship and the role of the Mosque, its design and function, such as the Mihrab and Minbar. The use of aids in prayer and the role of the Imam and the Mu’adhin. Islamic festivals such as Eid ul Fitr; Eid ul Adha. Lifestyle and the concepts of Halal and Haram, attitudes to dress and types of clothing. Ummah, the Islamic community: respect, religious duty and good actions. Marriage, worship in the home, attitudes towards women. Opinions of other religions and working within a multifaith society

The principles of Islam and the purpose and quality of life. Attitudes to abortion and euthanasia;  belief in life after death, resurrection and judgment. Considerations of fertility issues – contraception, IVF, AIH, AID. Surrogacy, reproductive cloning, Gene Therapy and Genetic Engineering.  Care for the poor, attitudes towards Less Economically Developed Countries (LEDCs),  the work of Muslim organisations and agencies in world development and the relief of poverty – attitudes to money and to giving to the poor and needy. Concepts of the Purpose of life, justice, reconciliation and peace.  Views about war, Greater and Lesser Jihad, attitudes towards disarmament, pacifism,  nuclear warfare and proliferation. Protest – different ways of protesting and reasons  for protest. The environment and  causes of pollution, attitudes towards Conservation. Earth Summits, animal rights and the concept of stewardship. Crime and aims of punishment; Capital and Corporal punishment. Final judgment before Allah and the issues of justice and forgiveness. Muslim life and the importance of Halal and Haram. Marriage and divorce, the importance of the family; education, children, the role of parents, the role of women, the elderly. Human sexuality and sexual relationships. Attitudes to drugs and gambling, attitudes towards moral and immoral occupations

The Existence of Allah and proving His existence. The First Cause (Cosmological) argument, the Design (Teleological) argument, the argument from religious experience and arguments against the existence of a god. Allah as all-powerful, all-loving, all-knowing, all-compassionate and all-forgiving. The Problem of Evil and the questioning of Allah being all-knowing, all-loving and the existence of evil and suffering. The different forms of evil (natural and moral), justification for the continued existence of evil and suffering. Concepts of agnosticism, atheism, conversion and free will. The Compatibility of Science and Religion and Muslim teachings about the origins of the world and humanity. Scientific theories such as that of the Big Bang and evolution and the role of Allah in creation. Different understandings of life after death and destiny. Attitudes towards fate. Islam as a way of life and Muslim upbringing. Religious experience, miracles and prayer.